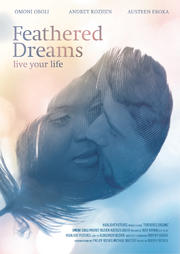 Feathered Dreams is based on a true story of Sade, a young medical student from Nigeria who dreams of a career as singer. Challenged by many circumstances of life as a foreign student in Kyiv, Sade perseveres with confidence and supported by.. her Ukrainian boyfriend Denis. Like Sade's real-life story, Feathered Dreams is set to become an exemplary alliance between Africans and Ukrainians. Backstage Gallery

Original Feathered Dreams Soundtrack - My Everything (performed by Gaitana)